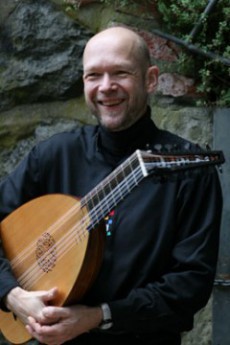 Most of my compositions are written for smaller ensembles, but there is also music for orchestra or electronic music. There are numerous compositions for lute, theorbo and guitar, including pieces of different styles as well as music for teaching.
Among the plucking instruments, especially lute and theorbo have fascinating tonal properties. There is a chance for composers and players to break away from the cliché of a merely historical instrument. It would pave the way for contemporary lute and theorbo music and new developments in instrument making. For this, a special page on this website is Contemporary Lute Music.

Here you will find past events

Since February 2020 there is the new page with continuously updated information about revised editions, new versions and errata pages of some compositions. Some special playing techniques are described. In addition to error corrections, the errata pages can also contain improvements to explanatory texts or notes to make the notation easier to read. 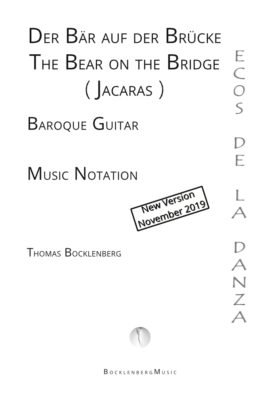 “The Bear on the Bridge” (Jacaras) for Baroque Guitar

Premiere on September 4, 2020 by Michael Freimuth, baroque guitar during. Part of his solo concert with baroque music by J. S. Bach and S. L. Weiss.

This piece is part of “ECOS DE LA DANZA”, a series of solo dances for various historical plucked instruments 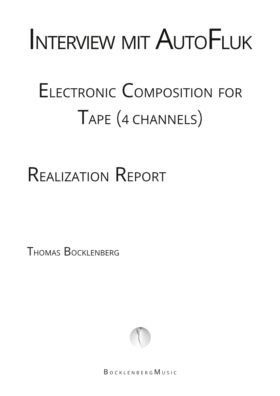 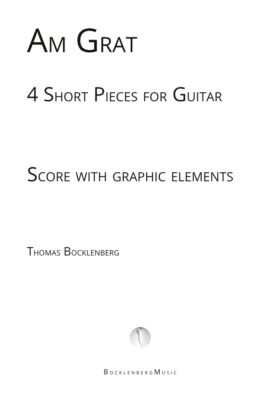 The pieces for Guitar are based on the opening motif a-b-c of the Chaconne in F Minor for Organ by Johann Pachelbel, which I transposed for an earlier arrangement to A minor and edited for guitar. The motif itself can only be heard hidden in these pieces, but forms the starting point for all fields of the composition. The studies are, despite their brevity, unique items, but can also be performed in the order given here. 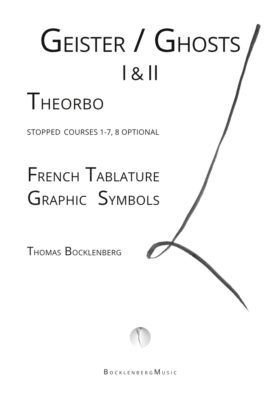 From the tonal intermediate world, always on the threshold of the non-tangible.
In addition to the special tuning of the bass courses, many different percussive articulations and playing techniques are used as well as playing with slide.
Suitable for medium theorbo size. 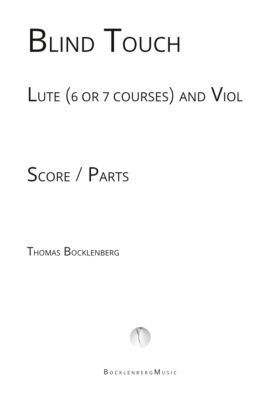 In this piece, rhythmics and tempo structures are a particular challenge for the players. To interpret the piece properly, the players have to find closest proximity despite the tonal diversity of the instruments. 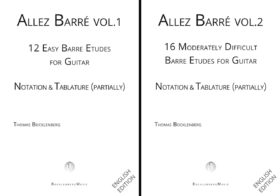 The short pieces should help to get into the barre technique on the guitar.

Book 1 provides easy pieces for guitar lessons, intended for students who are familiar with two-part-playing, chord playing, tirando and the beginnings in playing harmonics, legato and position shifting.  Instead of key signatures only accidentals are used.

This site uses cookies to ensure a fast, technically flawless website. If you continue your visit to this website, you are agreeing to the use of these cookies.OkFor information about cookies and your right to object, see Data Protection Declaration